Programme of the International Conference: Serbian (Yugoslav) – British Relations from the 19th to the 21st Centuries, Belgrade, January 26-27, 2018 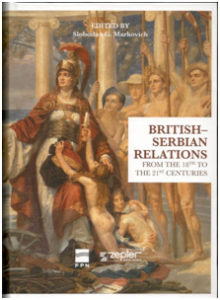 The book spans the period from the visit of Dositey Obradovich to London in 1784/85 to 2018. Political, diplomatic and cultural relations of the two nations during the course of more than 230 years have been covered. The first two sections include the main episodes in the history of mutual political and cultural relations such as the Eastern Crisis, the roles of William Gladstone and Miss Irby, extraordinary relations during the Great War, relations of the Church of England and the Serbian Orthodox Church, studies of Shakespeare among Serbs, connection of British women and Serbia, the role of Serbian anglophiles, relations of the United Kingdom with the Kingdom of Yugoslavia and the Communist Yugoslavia, and the relations of the dynasties of Windsor and Karageorgevich. The third section deals with the role of some institutions that have acted as intermediaries between the two cultures, such as the English Department at the Faculty of Philology, University of Belgrade, the Yugoslav and Serbian sections of the BBC, and the English Speaking Union. There are also contributions on educational co-operation under international sanctions, a review of English-Serbian and Serbian-English dictionaries, and an essay on what it is like to be an Anglo-Serbian writer. The last section comprises an analysis of diplomatic and political relations in the 21st century covering various aspects of a developed mutual co-operation, but also a series of sensitive issues such as the Kosovo Question, the impact of UN interventionism, and a wider question of Serbia’s relations with the West.